The developer Halftrack Studios decided to revive the legend by releasing the game Fruit Ninja 2. The original version appeared back in 2011 and made a splash in mobile gaming. A quality time killer title. To be honest, I myself got hooked on the project, spent two hours in it without noticing. And it was even more fun to play in the company, autumn evenings, a bench in the yard and the two of us are trying to break each other’s record.

The main task of the game is to chop fruits with different blades and at the same time not to salivate the delicious fruits. There are several modes, decorations and bonuses. But the most important feature is multiplayer, now it’s easier to find a partner to test your reaction.

In Fruit Ninja 2, there are noticeably more modes, but they are called events. The first three: Arcade, Meditation, Classic, no end dates and are available at any time. The last two, Race for Points and Mix of minigames, are available at specific times.

The arcade is stuffed with bombs, special bananas, which give bonuses in the form of stopping time, increasing the number of fruits and doubling them. The very juice when three bananas fall in a row.

There are no bonuses in meditation, only time and waves of fruit. You cut, you enjoy. 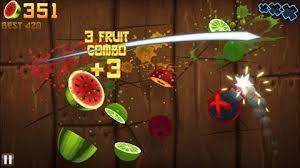 The classic has no time frame, but is filled with bombs and special conditions. Having hooked a bomb, the match will end, without cutting the fruit, life will be taken away. In general, the rules are simple.

Race for points is the first mode with multiplayer, there is an automatic selection of an opponent who is close to your points. In the mode, the first player to gain 500 points wins, and the time is not limited.

Five modes are more than enough, the more I mostly play a couple of favorites, the rest are just for quantity.

There is a separate league mode, so it is the highlight, because of which all the trash is forgiven. Now you can not only try to beat your record, but also beat your opponent online.

There are several locations in the league that open when the required level is reached. Matchmaking is fast, based on your points and league count.

After the countdown, fruits appear on the screen, yours are highlighted in blue, the enemy – in red. They fly out in batches, after the destruction the move is passed to the second gamer. There are no bombs here, as well as booster bananas. At the top of the screen, the counter of the destroyed fruits is displayed, and when the time expires, the result.

The downside is the colorful background of the locations, fruits are poorly visible on them, which makes it easy to miss. Perhaps this is a matter of habit, but I’m uncomfortable.

The second way to get players to log into Fruit Ninja 2 more often is with quests. For the completion of which points are awarded, with a sufficient amount, a reward is unlocked. Crystals, skins, bonuses, seeds, blades, gold and tickets. To get the maximum number of rewards, the creators offer to buy Elite status for $ 9.99. The system is very similar to the Brawl Pass in Brawl Stars.

After or before the battle, you can show emoji to the enemy in the form of words and emoticons. So far there are 106 of them.

At the time of this writing, there are 18 enhancements, each of which brings variety to the game, and sometimes they even decide the result of the match.

Gains
Amplification is a separate topic of conversation. Another innovation that distinguishes the project from the first part. In each match, three buffs are taken with you to choose from. It is better to adjust the set depending on the mode. Below is a description of several types.

Large Fruit – enlarges the fruit to make it easier to hit.

Tornado – attracts fruits, they stay longer on the screen, and the combo brings more points.

Garden
After planting sprouts in it, which are dropped for victories, whole boxes grow. True, for full growth, you will need water and fertilizer, if there are no problems with the first, then the second is more difficult to get (you can buy it in the store). 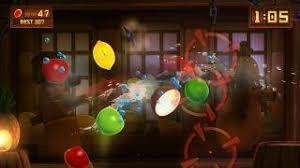 The title is awarded for the achieved level, and he, in turn, for the experience gained from matches. Up to level 20, the rank matters, because power-ups and other bonuses are unlocked. Subsequent levels will bring nothing, except for the inscription.

In terms of monetization, Halftrack Studios has completely licked the system with Brawl Stars. The main thing is that there is no need to donate, and for money it will not be possible to buy buns that greatly affect the outcome of the battle. Plus, adverts pop up from time to time, you have to wait 5-10 seconds to skip them.

The gameplay remained familiar, modes were added, but still 2-3 are used mostly. A pleasant moment was the emergence of a network mode, playing with other gamers is much more interesting. We can say that Fruit Ninja 2 went overboard, adding unnecessary modes, garden and quests. The interface seems to be overloaded.

But I’m ready to score on all the disadvantages and just periodically nostalgic when I launch the game on the iPad.