One of the best mobile fighting games out there, but it’s hard to get through without money

It’s no secret that not all genres of games from computers and consoles take root on mobile platforms. Fighting is especially bad. In them, everything is decided by the speed and accuracy of the techniques, and even a gamepad is not enough for hardcore players – they prefer special controllers copied from slot machines, with joysticks instead of sticks and buttons in two rows. But touch screens for serious carnage, it would seem, are not suitable at all. And yet some try. Shadow Fight 3 by Nekkid is one of the rare and successful exceptions.

The number 3 in the title of the game gives the impression that we are facing another part of a series, but in practice, everything is somewhat more complicated. The first Shadow Fight no longer exists in nature – it was a social game for Facebook, and the servers with it were turned off this October. Shadow Fight 2 can be downloaded from digital stores, but apart from the basic gameplay, everything is different there: it is a two-dimensional game with a faceless shadow character and an old-mode monetization model – in battles the hero lost energy, which was restored over time or for money. 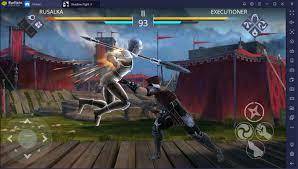 Shadow Fight 3 is a 3D fighting game with great graphics, advanced character customization, and an internal structure that makes you remember C.A.T.S. from Zeppola. For victories, boxes are issued that open several hours of real time – or instantly, but for premium currency.

The main thing that captivates in Shadow Fight 3 is simple, but at the same time very deep gameplay. There are only two punches – arm and leg – and eight directions on the virtual joystick. In combination, they give many options: direct attacks and from a turn, jumping attacks and sweeping, throws and even attacks from the ground, if you missed this very throw and ended up on your shoulder blades. The location is also important: a hit to the head will take away more health than to the body.  Axes restrain movement, but crush the enemy in close combat. A spear makes a warrior deadly at a long distance, but with it you need to be able to keep the enemy away from you. Finally, even the armor we wear matters: the game has three main schools with their own equipment, which changes the tactics of combat.

Don’t forget about magic. Having accumulated “shadow energy”, a fighter can switch to ultra-mode, in which attacks inflict significantly more damage. Here simple combinations become available, including super-attacks, the set of which depends, again, on the things worn.

Clothes and weapons in Shadow Fight 3 are generally a cult object and a stumbling block of the game economy. Things need to be pumped to become stronger. Things need to be pulled out of the booster sets (the simplest ones can still be bought for virtual coins, and the rarest ones are no longer there). Items are given for completing storyline and side quests, they can be obtained for watching ads. And most importantly: things are needed to equalize the chances in story-based battles (otherwise they will definitely heap) and in duels. Victories in the latter are needed to increase your online rank, which increases the chance of getting rarer boxes in which you are waiting for victory – well, yes, even cooler things. 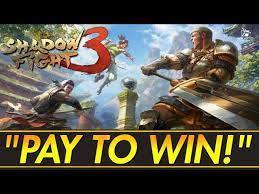 At the same time, the prices in the current version are twisted so that for a week of daily play I could not even finish the first chapter of the plot. Not that the story is very interesting: three extremely conditional Asian clans are trying to decide the fate of an ancient artifact, while the clouds of the apocalypse, familiar to video games, are gathering around. But still, the game is built around this story, and advanced opponents who sometimes come across in duels promise with all their appearance that at the next stages the battles will only become more spectacular and epic – by the way, the same is the case in C.A.T.S. But if the game Zeppola at least initially floods players with game dollars and parts for cars, then the authors of Shadow Fight 3 show some completely Asian pragmatism (even though both studios are from Russia). Surely the game can be played for free, but how long such a path will take is anyone’s guess. I only know that it took a friend of mine to complete the second part without donation, according to him, about a year.

At one time, Shadow Fight 2 was released in a premium version: for money, but without any energy and limitations. Given the economic model of the third part, this option is hardly possible with it. It is difficult to judge developers: paid mobile games are traditionally sold poorly, and the development of a project of this level costs a lot. In addition, Nekkid for the second time succeeds in almost incredible: to make a stylish, entertaining and intelligent fighting game for devices with a touch screen. For this alone, Shadow Fight 3 is worth spending a couple of hours on.