We recently wrote about Shadow Fight 3. Today we will be taking apart the game Shadow Fight 2: Special Edition from Nekkid on the Android platform. I will say right away to mobile games, as a person who grew up on consoles, I am extremely skeptical. And this is not a matter of prejudice, but of control and basic mechanics. What am I talking about? – short sessions. Any game for a portable platform, first of all, must have a session structure, and the session length must be extremely short, otherwise it will be difficult to play it on the road or during breaks. Action is the result. Push the button to win, as they say, but I’ll come back to this in the review, but for now, let’s talk about the game itself.

It is clear that they came to it most likely due to technical limitations associated with too much difference in hardware between different phones on the Android platform, but nevertheless, the designers found a very interesting solution that definitely pleases the eye. he backgrounds are rendered with high quality, and do not cause anything but positive emotions. In my opinion, the graphics deserve 8 out of 10 shadows, adjusted for technical limitations. 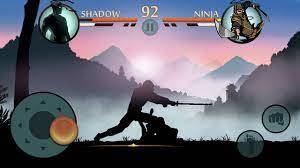 It’s better to play with headphones, because the developers have worked very well with the sound. The tunes are performed in a classic Japanese style with the introduction of an electric guitar. Personally, I really like this moment. Classical oriental instrumental sets the right atmosphere, and guitar riffs set the mood. All this is combined very organically. Sounds of blows … are. I will not say that they are gorgeous, but they do not cause any complaints either – they do not get out of the question, and okay. 8 out of 10.

Something that I was very afraid of, because I don’t trust touch screens a priori, especially in fighting games. The fears were confirmed. The control principle itself is quite adequate: two “buttons” for hitting with a hand and a foot, one for a throwing object (from the second act), one for something like a hurry or magic (starting from the third act), and 8 directions on the virtual stick. Everything is simple and familiar. If you compare Shadow Fight 2: Special Edition with “big fighting games”, then it’s primitive. On the other hand, what else does a portable device need? – in the subway, you can’t really twist a combo.

The responsiveness of management is another matter. Here the game has drawdowns. Small but very annoying. And the essence is simple: after the completion of a certain animation, for example, if you were knocked down, the stick must be returned to the center, otherwise it will not react. This is an unnecessary movement, it distracts, and you sometimes forget about it, which is why the initiative is missed, and the dynamics generally falls. If we take this feature out of the brackets, then everything is pretty good. 7 out of 10.

He is in Shadow Fight 2: Special Edition. I read other reviews of the game – laudatory praises in the spirit of the “time-tested Hollywood formula.” I may be a grouch or not a trend, but the plot is a set of clichés that are found in all fighting games: the tournament, the teacher, travel and encounters with enemies, a very big enemy at the end and blah blah blah. There are no special revelations, and there is no need for them – it is difficult to empathize with the hero, whom you see on the screen only as a dark silhouette. 6 out of 10 and then only because it is not annoying.

Now the most delicious thing is the mechanics of the game itself. The interface is quite convenient and intuitive, the background tutorial quickly introduces what is responsible for what, where to buy armor, where to train, etc. Everything is just fine here. From the point of view of design, there are also no complaints, everything is done in the same style, it looks organic and beautiful. It would seem a trifle, but in fact, a poor interface can kill even the best game. And if you do not notice it, then it is executed perfectly, because it does not attract undue attention to itself, which means that it fully fulfills its function – the player’s implementation of the plan as quickly and conveniently as possible. 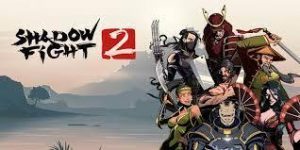 As for the fight itself, it’s just fine. I’m serious. At first, Shadow Fight 2: Special Edition looks like a regular 2D fighting game, but the Devil is in the details. The game has a very cool balance: every blow can be blocked, you can dodge it or have time to counterattack. What does it mean? So absolutely any opponent can be defeated, regardless of level and equipment … theoretically. In practice, of course, it will be extremely difficult for an ordinary player to do this, because it will simply require perfect possession of the character, but this is real. The combat is very good, the speed is high enough for the fights to be dynamic, and at the same time leisurely enough not to turn into a whirlwind of blows. This game is more about accuracy than speed.

You need to take into account everything, the distance to the enemy, the speed of your strike, the possible speed of the enemy’s counterattack and your location. The latter is very important because of another feature of the game. There are walls along the edges of the arena, from which you can push off while jumping. This adds an extra twist to the gameplay. Now it will not work to trap the enemy in the corner – he can jump back, just as you always have the opportunity to turn the tide of the battle with one successful action. It seems nothing special, but it has a big impact on the gameplay. One more thing, the game doesn’t like juggles and button mash. You won’t be able to juggle the enemy; after a few repetitions, your punches will simply stop passing. Random chiselling on the buttons also does not help much due to the speed of movement of the fighters themselves. The avatar simply does not have time to repeat all the button presses.