How to distinguish the first Temple Run from the second? We are used to the fact that sequels to great films are more often than not like trying to collect a broken vase. For example, the scriptwriter neglected the fact from the first part. Or the actor changed, because the capricious performer of the main role refused to appear in the film. Or pumped up the soundtrack. With games everything is different – they are being improved, modernized, improved. Developers listen to the opinion of gamers, read forums, seek out sensible criticism with the skill of a genius detective, but still attach the number “2” to the name. Temple Run 2 is from the same series of “pumped-up” games. The first part rumbled so that it seemed as if the penguins in Antarctica had acquired smartphones for themselves in order to escape from a flock of monkeys, jump over precipices, crawl under trees and collect coins hanging in the air. Record screenshots quickly flooded the growing Instagram, and students and schoolchildren prepared for classes on the principle of “die in Temple Run five times, then read a page of text.”

The myth that games that cannot be played will never become hits was dispelled back in the eighties – Tetris, as you know, is unrealistic to pass, it is endless, but still popular. Temple Run, in turn, will be popular until more advanced solutions come to our world. For example, applications built specifically for Google Glass. However, in this case, developers can easily navigate and present Temple Run for “smart” glasses, where the owner of the accessory will be the poor fellow who needs to escape from the gorillas. However, among our readers will certainly be found those who either did not hear about Temple Run, or heard from friends, promised to install, but soon forgot their words. So, especially for the uninitiated, we will explain. The scene is the jungle. The main character is a man with inexhaustible energy, ready to run half a marathon distance in one breath. The goal is to break away from the monkey (in the second version, their number was reduced to one). There are many obstacles – cliffs, iron mills, fallen trees and other dirty tricks. The player’s task is to maneuver using the accelerometer and swipes across the screen. The first is for collecting coins, the second for sharp turns. The bottom line is always the same – the jungle world is generated endlessly and you have to die. One hundred percent. Death can only be avoided in one case – to pause the game and keep it in the background.

From now on, girls who borrowed iPhones from their young people will no longer exclaim in hysterics: “You pushed me and I lost!”. They will have green diamonds that allow them to resurrect and continue the game. Of course, the number of resurrections is strictly limited. The developers have made adjustments to the jungle itself – the hero will have to ride in a trolley, go down, holding on to the rope and dodge new obstacles. Once again, we note that instead of a flock of hungry and gluttonous monkeys, the character has only one pursuer – a hefty orangutan, making frightening sounds.

There are bonuses along the way; they are typical – magnet, invisibility hat, sprinter mode, and so on. The hero can be developed using the accumulated coins. Lazy, but well-to-do gamers, who are not used to wasting time on “some kind of pumping”, will easily transfer their hard-earned money to the creators and get a soldier of fortune ready for all adversity. 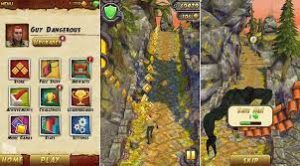 Honestly, the first and second versions can be easily confused with each other. Especially at first glance. But this circumstance still does not matter at all – both variations on the theme of the two-core and doomed jungle runner are simply beautiful.

the developers have kept all the good things that were in the first part; all the innovations will appeal to fans of the first part of Temple Run; even Usain Bolt, one of the greatest athletes of our time, a record holder at a distance of 100 and 200 meters, shared his record on Instagram

in Temple Run, the composer clearly went too far with the sound – what plays from the speakers absolutely does not correlate with what is happening on the screen; the menu has become a little cumbersome – if earlier it was possible to understand it in 30 seconds, now it will take about two minutes to master it. For some, this is critical; the game is not translated into Russian.