At the end of the year, Gameloft decided to release a beautiful and high-quality game, impressing all the fans of the series and making some money. Brothers in Arms 3 caused a storm on the Internet and almost every Internet resource dedicated to games wrote a flattering review about this game. The product is based on a very interesting story about a detachment abandoned behind enemy lines during World War II. The war is already coming to an end and our task is to “finish off” the forces of the enemy. Everything seems to be very interesting, the developer has always shown excellent games, and the graphics are at a very high level. True, in reality the toy turned out to be very boring and monotonous. Even being a fan of shooters and the Brothers in Arms series itself, you don’t want to be in the game for a long time – it doesn’t add up at all. Apparently, wanting to amaze us with a bunch of graphic special effects and features, the developers have completely forgotten about the soul of the series.

The main problem of the game is precisely the skirmishes between our hero and opponents. Our gallant soldier constantly carries with him a “brother in arms” who helps to fight the Germans, but there is no sense in this support. “Brother” only occasionally distracts fire from us, shoots rather crookedly and allows us to use special skills – he removes one enemy from a long distance, covers the field with an air strike and all that. The battle itself takes place in a straight line – we have a certain location, 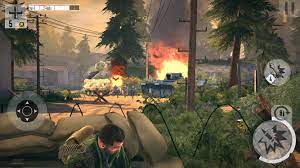 given shelters and opponents that appear only when you get to the shelter. Our task is to banal shooting opponents from behind cover. We do not control the direction of the battle, we cannot go somewhere to the side. I am glad that at least we are moving ourselves, but it is still possible to go only along a given route. The monotony of the battle was diluted with additional elements.

Throughout all battles, we will receive experience for each killed enemy, and if you kill the enemy in the head, experience is given more. This encourages you to shoot more accurately, to choose the moment for a headshot. From time to time, enemies throw grenades at us, shoot at cover from tanks and attack with large detachments. In these situations, the battle changes a little – the grenade can be thrown back, the squads are killed by an air strike, and there will always be a grenade launcher near the tank. True, there are very few such details and they are constantly repeated and you do not get any pleasure from such “variety” at all.

We will have to constantly improve our weapons, as the opponents are gradually becoming stronger and our rifle will no longer be able to hit them with one shot. You won’t be able to complete the level without improved weapons, so you need to save resources and wait for the barrel to be upgraded. Of course, 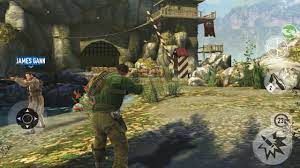 for real currency, you can not only instantly improve weapons, but also buy a couple of very cool guns in the store. Unfortunately, here almost everything is sold for real and it will not be possible to expand the arsenal without investments. It will be interesting to run the whole game with the same murder weapon? I do not think.

The developers tried to surprise us with high-quality graphics, but it didn’t work out very well, because there are shooters on the market with more realistic graphics and effects. Monotonous shootings completely buried the toy – it is simply not interesting to play it after the first ten minutes, since the gameplay does not change at all. After an hour or five hours, you will still be shooting from behind the boxes and throwing grenades away. Let’s add here an abundance of donation, because you won’t get any new barrels without real money, and we will get an ideal game for 15-20 minutes.