Hasbro’s Game of Life is a New Year’s gift for my 7 and 9 year old kids. We already have several games from this manufacturer: Children’s Monopoly Frozen, Collect 4, Sea Battle and Shark Hunt. All games are exciting and interesting, so the new game was accepted with joy. They chose between an adult monopoly and a game of life, and decided that the monopoly was too early, and bought a game of life.

The game box is bright and colorful. Dimensions 40x26x5 cm. The top cover has a hole for the drum. The recommended age of players is from 8 years old Just a family of 4 can spend an evening with interest. But even together, children can play if there is no one to keep them company.

There are many elements in the game, and adults need help to figure out the rules. The main element is the playing field.

It has paths with cells in the style of a classic walker; a drum with ten divisions is attached to the field. The drum is here instead of cubes. You need to determine the number of cells for a move by rotating the drum. 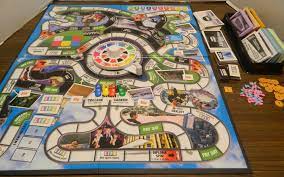 Further in the set are chips. We will be walking around in cars with holes to put the little people there. First, one little man goes, then he gets overgrown with a family – he gets married and has children. All members of his family ride with him in a typewriter through life.

There are many cards in the game. The cards are divided into 4 types – Action cards (there are the most of them), Career cards and Career with education cards and Housing.

They are all of different colors and different denominations – 10 thousand, 50 thousand, 100 thousand and 500 thousand. We have this banal rubles. There are also credit certificates for 50 thousand. This is in case the player does not have money to play, then he can take a loan from the bank.

Well, there is a detailed instruction for the game. You can’t play without it. Moreover, in the first game you cannot even take a step without instructions, because you cannot intuitively understand anything. Well, almost nothing.

So, to start the game, you need to choose a banker – a person who will issue and collect money from the players. It must be an adult. Then everyone chooses a car of the desired color, sits down the little man, and the game begins.

The game begins with a choice – either to start education, or immediately go to work. At the same time, jobs that can be chosen after receiving an education are more highly paid than those without a university, but the path is longer. A task awaits the player on each cell. It is not difficult, for example, to tell everyone what book you would write, or to play on a fictional drum or show the movements from karate. A reward will be paid for all these actions. There are tasks, on the contrary, for payment, for example, buy an aquarium or a gift for the 100th birthday of your grandfather. Players draw all these cards at random, so it is impossible to say in advance which one will come across.

Along the way, there are many cells “payout”, on which the player receives money in accordance with his card. Thus, savings are accumulated for retirement. 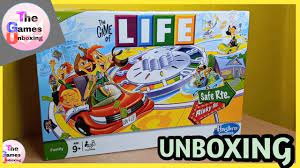 At the end of the game, everyone counts up their assets – cash, money in real estate, money for each child, and for each action card. The winner is the player who did not retire first, but saved the most money

Of course, the game is exaggerated in order to understand life from it, but this is child’s play. It can be used to trace the path of life of a good person who studies, builds a career, starts a family, thinks about buying a home. About everything that we all need in life.