The NBA 2K series of basketball simulators has long been considered the best in its field. With the main competitor in the person of NBA Live, they do not get the same confrontation as PES and FIFA. The Visual Concepts team is actively developing its basketball brainchild from year to year, regularly introducing new features and improving various aspects of the gameplay. With the release of NBA 2K20, an interesting situation has developed: at first it seems that its filling is not very different from what was laid down in last year’s release, but in reality it is not.

The Midcareer mode, which allows you to create your own player and walk with him from the college team to the NBA star, pleasantly amazes with a powerful plot prologue. The trend of incorporating athlete stories into simulators has suddenly been successful. While FIFA is holding on to Alex Hunter, NBA 2K is laying out separate scenarios. In a fresh game, we can observe the drama unfolding around a young talented guy Che (English version – Che), who, due to disagreements with the coach, did not come to a very important game of the college team and, as a result, began to follow his dream in a difficult way.

The plot scenes and the story itself were handled by SpringHill Entertainment, created by LeBron James and his business manager, Maverick Carter. By the way, these guys, like a couple of other recognizable personalities, appeared in some episodes of the game. The cinematography and elaboration of cutscenes at the highest level. One gets the impression that you are watching some kind of interactive movie with basketball integration. I am very glad that the essence of the performance was not reduced to the demonstration of cutscenes between matches, here the priorities are differently set. The gameplay is given a little less attention than it should be, but it is moderately varied. We do not just enter the field, but actually make our way into the league through training sessions, mini-games in qualifiers and matches of different formats.

NBA 2K20 gives the player a lot of space in terms of creating his character, here you can not only play with the parameters, choosing the strengths and weaknesses of the future avatar, here you can give him an appearance using a camera and a smartphone application. Even at the stage of its download, the author of these lines was confused by the low ratings of the program on Google Play, it turned out for a reason. It handled the face capture incorrectly and gave an error. I had to be content with one of the standard images. As a disadvantage, it is difficult to write down such things, not everyone gives players such an opportunity, but if it does exist, then it should work correctly.

The Midcareer mode is just right to be considered one of the most important in the game, since it is in it that the main currency of the game, VC, is earned completely legally. An alternative way to get it is real money. Microtransactions have seeped into virtually every element of the fresh simulator. It’s time to remember the trailer for the Mytheme mode, after which the players began to call NBA 2K20 a casino simulator. The comparison is funny, but it is only partly true. It is worth recalling that Mytheme is an analogue of Ultimate Team from FIFA, in which players can collect their dream team by opening boosters with cards.

This fuss is very reminiscent of baseball cards from American films. You’ve probably heard of them. The stars of the first magnitude are worth their weight in gold, but here they do not just decorate the collection – they really show the class with the ball on the floor. Moreover, some can progress, it is enough to fulfill a number of conditions of the format “make X passes, selections” and the athlete’s performance will grow. In addition to the mentioned VC points, tokens and MT points are available here. This whole business is accumulating incredibly slowly. Feeling that you are trying to fill the tank with water, collecting dew. This is a purely psychological moment, because you want to grab good players, but quickly! But valuable VCs are needed not only in Mytheme, they are also good for character development in Midcareer. Be so kind as to fork out if you want to speed up the process of getting everything and everyone. 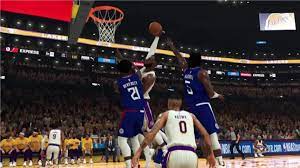 In fact, players can fill their piggy bank for a very long time and methodically, because sports simulators are a repayable thing! But then, damn it, it can come to a banal grind, as if in some kind of shareware game. It’s one thing when there is no alternative, the fastest way of development, and quite another when there is one. The feeling of progress immediately seems overly sluggish and viscous. It is difficult for any ordinary gamer to get used to the idea that, having paid for the game, he is forced to give something else from above in order to feel satisfaction and pleasure from the process of development and pumping. Even the banal desire to look normal compared to other players in the poorly detailed hub of the career mode is already pulling money out of your pocket. I don’t want to just drop VC-points, earned by dozens of the hardest victories, on clothes.