An optimistic, brave and cheerful cartoon character is able to please you not only on TV screens, but also in various video games. We have selected the best SpongeBob games that kids and adults will love.

An exciting arcade game in which gamers have to save the legendary Crabburgers from Crusty Krab. Plankton is hatching another plan and seeks to steal the recipe for yummy, and you will prevent him from doing so. The gameplay consists of mini-games. In the menu, you can navigate between different locations (SpongeBob’s house, his yard, and so on).

By clicking on a certain place, or on a character, you will call a mini-game for a while. They are quite fun: in one, you, controlling the robot Mr. Krebs, try to collect a burger, finding various ingredients, and in the other, as SpongeBob, you will take a driving test.

SPONGEBOB SQUAREPANTS: EMPLOYEE OF THE MONTH (2002)

In the 3D game Employee of the Month, SpongeBob will travel to the best underwater amusement park called Baraka’s Cove, but on the way, he will face adventures and various obstacles.

Employee of the Month is a quest in which you, moving between locations, will explore them, communicate with cartoon characters and look for key items. Sometimes, in the process of passing, you will come across simple puzzles in the form of mini-games. 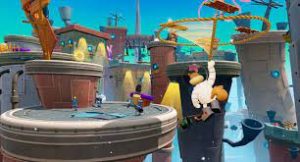 A three-dimensional adventure, an arcade platformer in which SpongeBob travels with his friends around his world and tries to thwart Plankton’s plans. Unlike other games, here the user will not only solve puzzles, but also fight enemies using abilities and collect “points” that are needed to open levels.

The heroes have interesting abilities. For example, Sandy can float in the air (in water) with the help of a lasso, SpongeBob can turn into a ball and break obstacles, and Patrick can help you lift heavy objects.

Plankton will get you in trouble again in a third person arcade game. He stole Neptune’s crown and framed Mr. Krebs. SpongeBob and his friends are going to go on an adventure to rescue his boss and get a promotion at work.

By controlling various characters (SpongeBob, Patrick, Mindy, Plankton), you will explore 3D levels and collect collectibles to get points. The game stands out for its fascinating storyline and the presence of 8 locations.

Residents of Bikini Bottom decide to take a break from the endless feud with Plankton and open their new show “The Adventures of the Clam Boy and the Mermaid Man.” . Will you help SpongeBob get ahead of his competitors and make his dream come true?

The user is invited to compete in various mini-games with other residents of Bikini Bottom. You will cook crabburgers for a while, become the star of a rock concert and solve tons of speed puzzles. There are 30 levels in total, and you can play not only as SpongeBob, but also Patrick, Squidward and others. There is a cooperative 2v2 mode.

Another arcade adventure game in which you, as SpongeBob, will explore levels, participate in races and other mini-games, collect collectibles and fight enemies.

The idea behind Creature from the Crusty Krab is interesting: the gamer will visit different worlds that are the dreams of the heroes. They have to get out of their fantasies and find out who inspired their dreams and tried to steal the crabburger recipe.

in which SpongeBob made a thousand burgers for Mr.Krabs. Plankton again gets involved in their own affairs and decides to blow up the Crusty Krebs, as a result of which the crabburgers are scattered throughout the city. SpongeBob together with Patrick will go in search of his precious creation.

There is no combat system, and the game is more suitable for children.

In Diner Dash, the cheerful protagonist has been promoted to control the Crusty Krebs! Joy quickly changes to workload, because this is not an easy task. The player in the role of SpongeBob will take orders from visitors and serve them ready-made meals. Be careful – if you keep your customers waiting, they will leave the restaurant and you will lose precious points.

Over 50 exciting levels await gamers. The game is simple and suitable as a “killer” of time for children and adults. 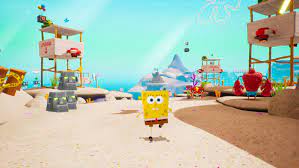 Adventure arcade game with an intriguing storyline. SpongeBob hid the secret crabburger formula at home, but during the party he forgot where she was going. Plankton is called in to help, as always trying to implement their insidious plan. But as a result, things do not go according to plan, and Plankton travels to SpongeBob’s memories to complete his mission.

Moving through the different levels (the main character’s home, Bikini Bottom), you will collect the coins you need for upgrades and fight the robots that were previously Plankton’s servants. There are also boss battles, such as the giant robot Patrick. Mini-games such as races and sports add variety to the gameplay. The game, unfortunately, was visited only by game consoles.