In short, Rage 2 can be described as “open world Doom”. The shooter part of the game was developed by id Software, and you can see it. The dynamics of the shootings, the way they feel in your fingers, is one-on-one as in the last game about Mars and demons. But the gameplay with car rides, exploring locations and visiting points of interest was done in the Avalanche studio by the authors of Mad Max and Just Cause. This is also striking: the vehicles behave very similarly, and the mission structure looks familiar.
Rage 2 is full of recognizable gameplay elements from the above games. And we clearly saw something in other projects. And on their own, the developers have added a lot …
Okay, it didn’t work out short. Let’s take a closer look.

Formally, Rage 2 is a sequel to the 2010 game, but the only common projects are the name and setting. In words, the gameplay of the first and second is very similar, it’s true: there is a global map, missions are scattered across it, you can move between them by transport, although the main action takes place when you run on foot.

If in the first Rage the player was immediately taken by the scruff and dragged to solve the problems of the inhabitants of the wasteland one after another, then here we are released immediately after the outset and are forced to do something extremely rarely. The starting video briefly recalls the events of the first part: the asteroid Apophis fell to the Earth, post-apocalypse ensued, but some of the people survived in the shelters-arks. And just one of these survivors, according to the plot of the original game, managed to hack the Government and launch a new wave of arks from orbit.
Our new hero named Walker is from this “second wave”. He (or she – depends on the choice at the beginning) all his life dreamed of joining the ranks of rangers, elite warriors in beautiful armor, and confidently moved towards his dream. But as soon as the matter came close to the entrance exams, the Government’s shortcomings attacked the settlement where he lived, and almost everyone there was massacred.

I had to join the rangers externally, having removed the armor from the deceased comrade. Well, then Walker will have access to the big world: it is necessary to establish the location of the main villain and arm himself sufficiently to eliminate him. After meeting the three key characters who will develop a plan for revenge, the hero will be left to himself for a long time: before the plot moves forward, you need to build a reputation with each of the trinity. How exactly is your business. Grab on to any missions you like: they are color-coded so it’s always clear who you’re working for right now.

In the first Rage, there was no real open world: the small map was rather a network of narrow corridors connecting key locations. Collectable items were scattered here and there, and enemies regularly spawned on the roads so that the player would not be bored of getting from point A to point B.
The situation here is completely different. The open world is really huge and rich, dozens of points of interest are scattered around it, and you can move not only along the roads, but also directly, taking a shortcut. The map is divided into six districts, each decorated in a different style – from sandy deserts in the south and swamps in the center to tropical jungles in the north.

In each district there is a peaceful settlement, which serves as a base for the player: there you can buy equipment, find out something, and collect quests. The latter, by the way, is optional – most of the tasks can still be completed by simply stumbling upon them while exploring the map. In fact, the quest giver simply makes a mark on it so that you can move there purposefully.
The skirmishes are also not like those in the first Rage. There they are quite unhurried, and even then it caused natural surprise. Say, the game is from id Software! Who, if not them, should specialize in dynamic action? However, it was just after the third Doom …
Fortunately, since then there has also been a relaunch of Doom (2016), and shooting in Rage 2 is a hell of a lot like shooting there. Up to the familiar feeling of weapons, double jump and finishing in melee, if the enemy has little health left.

But on this recognizable frame, many new chips were hung. For example, Walker has superpowers such as kinetic push, shielding enemies through walls, dash to the side, or hitting the ground with damage in a radius. And he also inherited a defibrillator from the original Rage, capable of preventing the hero’s instant death every few minutes. Enemies still wear armor and helmets that must be knocked down before the bullets start to harm their health.
In addition, the hero disposes of grenades, first-aid kits, drones-drones and the “afterburner” ability, which is recruited while killing opponents, and when activated, it sharply increases your firepower for several seconds. It is easy to get confused in all these functions, but, fortunately, they are not immediately dumped on the player. It is the guns, superpowers and numerous upgrades to them that we have to collect all over the map, completing side missions. 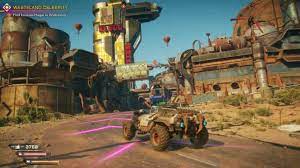 Almost everything in the world lends itself to an upgrade in Rage 2. Each superpower has three levels of development, and equipment and weapons have as many as five, and for the latter, sometimes you have to choose from two options: say, a shotgun either reloads quickly, or holds twelve rounds instead of six, and the machine gun either increases the rate of fire, or better pierces armor.
Walker himself can upgrade from a surgeon: this way he increases his survivability, the duration of the “afterburner” and the damage done. In addition, there are as many as four development trees in the game, where additional perks are unlocked: damage from falling from a height is removed, various kinds of radars and trackers are turned on, the capacity of the backpack is increased, and so on. Different resources are spent on all this: somewhere you just need money, somewhere you need a mineral called feltrite, and somewhere you need rare parts that fall out of bosses and hidden chests.