Probably, fans of the series have never had so many questions for it, because at the presentations the developers showed a completely new game that only remotely resembles the original. We spent several evenings at King’s Bounty II and are now sharing our impressions. Despite all the fears, the sequel turned out to be very solid, albeit with a slight touch of déjà vu. Read more in our review.

The set-up in King’s Bounty II is pretty simple. Our hero begins his journey in the dungeon of the Kurtis fortress – a gloomy and cold place, painfully reminiscent of the Black Castle of the Night Watch from Game of Thrones. Soon the judicial system acknowledged the mistake and released us, but we didn’t have to rejoice for a long time. Now we ourselves will have to understand this matter, at the same time solving a lot of problems in the troubled kingdom – to pacify the rebellious counts, fight robbers, help refugees and clear

Getting to know the game

King’s Bounty II offers the player a classic choice of character for the series: you can explore the world and save the kingdom of Nostria as a warrior, mage or paladin. Each of these heroes has its own set of talents and characteristics that directly affect the passing style. There are no surprises here: the warrior relies on the strength of the army, the mage specializes in spells and magic scrolls, and the paladin successfully balances between the two classes. Each hero has their own motivation and backstory, which somehow led them to the dungeon of the Krutsis fortress – the place where the first story chapter (read: training) begins.

Although the game involves role-playing, the talent system in King’s Bounty II is built in such a way that you almost always get some kind of hybrid build. I played as a mage and calmly got the primary skills more suitable for a warrior or paladin. True, it is unlikely that it will be possible to completely pump from one class to another, and there are doubts about the expediency of this venture.

There are four types of talents in the game: Order, Strength, Anarchy, and Mastery. In the “Order” branch, you can pump morale, leadership, duration of buffs, and even the ability to resurrect units. The “Strength” skills increase the combat characteristics of the army – increase the damage and armor of warriors, as well as resistance to depuffs. In Anarchy, initiative, trade, treasure hunting and vampirism are swinging, and the Mastery branch is entirely devoted to magic, the study of spells, increasing their power and reducing their cost. In general, the field for experimental builds is quite extensive.

In previous games in the series, to level up talents, you had to collect multi-colored stones. In King’s Bounty II, the developers abandoned this mechanic in order to more closely tie the acquisition of skills to role-playing. Each talent, in addition to the talent points themselves, which are given for gaining a level, also requires reputation points. You can earn them for completing quests, solving the problems of the inhabitants of the kingdom in one way or another.

For example, in one of the starting tasks, the villagers and the guards from the castle did not share something between themselves. Depending on which side you take, the corresponding reputation branch will be pumped. If you want to pacify the guards in battle, you will pump “Strength”. Persuade the peasants to calm down and lay down their arms – you will earn the reputation of “Order”. Usually such quests are tied solely to the moral choice of the player. There are no deliberately correct or incorrect answers here, and the task cannot be failed at all. After each mission, in any case, you will receive a reward and some kind of end result that will affect your reputation and the overall storyline. If you want to be a wise and strong magician, you will have to try to solve problems peacefully and save wizards from trouble. You will need a reputation for the Anarchy branch – be prepared to run on orders from various robbers and participate in dubious scams.

In addition to the new talent and reputation system, King’s Bounty II has finally made a convenient inventory that now shows all available items and scrolls on one page. Usually, equipment increases the parameters of secret knowledge, the power of magic or military affairs. The first is responsible for the amount of mana, while the other two are responsible for the power of spells and the attack power of your troops. There are also parameters of armor and resistance – they are responsible for protecting units from physical and magical attacks. Some artifacts can also increase the speed of units, the level of health, initiative, leadership and other characteristics of the hero or controlled units.  Just like in a classic RPG.

It’s easy to figure out all this wardrobe. As the game progresses, you just try to find and put on more and more powerful equipment with parameters for the main class, and sell old or unnecessary clothes in the store. The coolest items can be obtained for completing quests or bought from the master in the forge, and some artifacts can be assembled into whole sets. A separate beauty is that there is no weight limit or cells in the inventory, which means that you can store a lot of all kinds of junk for sale there.

The section with the army has also been slightly changed. As before, no more than five units can be put up for battle, but now they do not look like a warrior with a number under their feet, but as a group that grows depending on the number of units. Another interesting nuance of the second part is the individual pumping of units. In King’s Bounty II, experience for the battle is received not only by your hero, but also by all the soldiers in the army. Due to the experience, their rank is pumped, their characteristics increase and active skills are added. You should be careful, because if the squad is completely destroyed, then you will have to download it again. 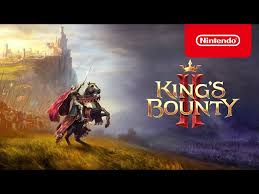 Back in King’s Bounty II, the limit on reserve troops was removed. Now you can take with you as many reserve units as you like, adding or excluding them from the main army if necessary. If during the quest some warriors want to join your army, then you will not need to free up space for them – they will automatically fall into the reserve. Then you will figure out how to deal with them.

Traditionally, for a series, the number of units in a squad depends on the leadership of the hero. The higher this parameter, the more people you can hire into the squad. Warriors also have a belonging to one or another reputation. If you collect an army from only one faction, then it will have better morale, which means more chances of getting an extra move or delivering a critical hit in battle.