Created specifically for PlayStation VR, this game has become its trademark and, in general, one of the most iconic for the virtual technology industry. Here players embark on a dangerous journey through a hostile alien world in search of the fallen Pilgrim space station and the surviving crew members. In the process, you need to learn how to handle the main and secondary weapons and explore the world around you, revealing the secrets of a strange anomaly that caused all this fuss. The PS VR Aim Controller allows direct interaction with the gaming environment, and the PlayStation Camera tracks the position of the built-in motion sensors and the glowing ball, accurately reflecting the player’s every step.

In The Inpatient, we find ourselves in the role of a patient of the Blackwood Pines mental hospital – the player wakes up in this strange hospital 60 years before the shocking events of Until Dawn, without remembering anything that happened earlier. The hero will have to understand how he got here and reveal terrible secrets. But on the way to the solution, you need to survive a real virtual nightmare that threatens to make you a nervous and gray-haired stutter. And all thanks to the fact that the game squeezes everything out of VR technology: at first we are locked inside some godless chamber-room, forcing us to answer the questions of a strange doctor, while the sensations inside it are so real that you want to strangle the torturer or literally push away from myself. Then you have to re-learn to walk, see hallucinations and nervously jump away, dropping gamepads, when a monster suddenly pops out at you from nowhere. In the midst of this nightmare, the player must make important decisions in a branching story with different endings. 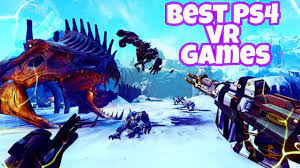 Until Dawn: Rush of Blood

Another game in the Until Dawn universe. More simple mechanically, but also very scary. Until Dawn: Rush of Blood Spinoff is a rail-based horror shooter in which the player has to ride on a railroad teeming with evil monsters – including evil clowns, nurses and other frightening characters. At the same time, according to the plot, the hero is inside the consciousness of the very maniac who terrorized the teenagers in the original. You understand that in his head it is scary, dark and uncomfortable – and virtual technologies allow you to almost physically feel your presence inside the product of the mind of a mentally unhealthy person.

But in Resident Evil 7: Biohazard VR, we got a full-fledged original game adapted for virtual reality. Thanks to the use of a PlayStation VR helmet, exploring the mansion of the crazy Baker family is even more frightening – even inveterate skeptics will jump a couple of times with fear and surprise when, for example, they first encounter molds. In addition, in the VR version it is more convenient to navigate and shoot – after all, you can aim your gaze, handing out headshots to the right and left.

DOOM VFR takes a fresh perspective of Mars and Hell and overwhelms an army of demonic enemies. Especially for this version, a new hero was invented with his own abilities, new mechanics and locations. To stop the invasion of demons at the UAC Martian base and in the depths of hell, a cyber soldier is called upon, whose consciousness after death was transferred to the matrix of an artificial brain. This, among other things, allows him to load his mind into UAC devices and robots in order to solve puzzles and enter new zones. In addition, the cyber soldier can teleport and jump using a jetpack. The authors have done everything possible to make moving, shooting and finishing demons in virtual reality as brutal and addictive as in the action movie Doom 2016 release.

The VR adaptation of the already cult RPG The Elder Scrolls V: Skyrim from Bethesda Game Studios includes the game itself, as well as the official add-ons Dawn guard, Hearth ire and Dragonborn. But most importantly, with a virtual reality headset in Skyrim VR, not only the point of view changes, but also the feeling of the game itself. Here you can use powerful spells, acting with both hands independently of each other, swing your sword, block blows and shoot arrows like in reality. The fact is that when using PS Move, each controller is responsible for its own hand – and in each you can take a sword, shield or bow. Therefore, the combat system feels as realistic as possible. Even mechanics such as interacting with the world map and leveling up the character work in a new way.

A beautiful and dangerous virtual adventure for PlayStation VR, created by renowned studio Crytek. The planet turned out to be quite a habitable place, but also dangerous – it is inhabited by local dinosaurs. To survive, the player needs to build his own camp and farm for growing food, explore the world around him, interact with various objects, solve puzzles, look for ways to get to the next location, collect data about the local fauna, and even catch local animals. And Robin is helped by the robot-assistant HIGS, which resembles a ball, as well as a tamed baby Tyrannosaurus rex named Laika. 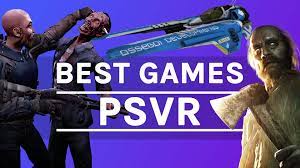 VR mode in Gran Turismo Sport is considered the best in its genre to date. “We put a lot of effort into the development process, and as a result of our efforts, the VR mode in Gran Turismo Sport is at the top of the industry. I don’t think that you will find such a high-quality racing VR project, ”said the head of the development studio Kazunori Yamauchi. And it is easy to see this for yourself by launching virtual competitions in a one-on-one format against a driver controlled by artificial intelligence. The cars in the virtual version of Gran Turismo Sport feel almost real, and despite some of the gameplay limitations of the VR mode of the game (time trials and duels), each ride becomes more vivid and memorable.