Pocket monsters Pokémon, invented by Japanese cartoonists, quickly gained worldwide fame. They began to produce children’s toys, collectible chips, filming serials and, of course, making computer games of various genres. And although it is difficult to find a person in Russia and the CIS countries who would not have heard of Pokemon, few people have played video games based on this universe (except in slot machines and on consoles of the old generation, which have all been scrapped long ago). So let’s catch up and see what Pokémon games the developers are offering us.

Cartoons about Pokemon were first shown in Russia in 2000, and along with them other formats were popularized – stickers, chips, toys and computer games. They have had great success and good ratings. The concept of “Pokemon” in the world of games and anime means a creature that has unusual, sometimes even strange abilities. Pokémon know how to fight each other, among them there are weak and strong creatures. The game is rather unusual because it is impossible to play it in one position. The essence of the gameplay lies in the fact that the owner of a mobile device with Pokemon GO installed must definitely go outside to find and collect Pokemon in augmented reality, created using his mobile device with a camera. They can be found both in typical places and in non-standard ones. With ordinary creatures, such as birds, caterpillars, you can meet quite often, anywhere, and unusual, rare individuals will have to hunt. If the Pokemon is strong, then it will be more difficult to tame it. The wider the collection, the better. You can also fight other Pokémon owners and prove which of you is stronger and better. 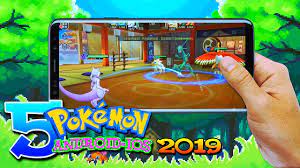 The game is very popular not only among teenagers, but also among quite adults, who are sometimes as addicted to it as children. People are seized by excitement, adrenaline, new feelings and emotions. One of the reasons for such huge popularity is the unique gameplay that makes people move, do something, and not just sit somewhere in the corner with their tablet or smartphone. Although, sometimes such walks lead to completely sad consequences. There were cases when hunters for rare Pokemon wandered into disadvantaged areas and were attacked by robbers, and in Russia not so long ago there was a scandalous story with a popular blogger who went to catch Pokemon in a church and was sent to prison for insulting the feelings of believers.

Pokken Tournament first appeared on Japanese slot machines. The developers immediately managed to distinguish their brainchild from competitors thanks to the unusual design of the controller, which in its essence was a kind of gamepad familiar to everyone. Such a find turned the novelty into a fighting game that was simple enough to master. Nevertheless, the mechanics and principles of the game did not break traditions and practically did not differ in anything from numerous popular fighting games. Spacious arenas, lightning-fast movements of fighters, variable attacks from a distance – all this was familiar to fans of waving fists in the virtual world. The Pokeno Tournament character roster may not seem impressive at first glance, but fans of the Pokemon animated cartoon universe will meet many familiar characters. Small and agile Pikachu, hulking fire-breathing Charizard, fighting and versatile Pokémon – no surprises. It’s all about a well-thought-out system of attacks, defensive maneuvers and special techniques that makes each hero unique and unpredictable.

The Pokémon game, ported to the Nintendo console in 2016, sets itself apart from other fighting games in that memorizing moves and combinations is not the only way to crush your opponent.  The game mode “for one player” is clear and obvious: the player creates a hero, chooses a Pokémon with whom he participates in a series of competitions. In battles with other trainers, money and game badges are earned. To maintain interest, the level of difficulty of battles is constantly increasing, and the possibility of moving from one league to another, visiting various locations, encourages the player to continue playing.

At the same time, there is a pumping of the Pokemon, which was tamed by the main character.  You can call auxiliary Pokémon to help: they appear in the arena for a split second, use a unique technique and disappear. The earned in-game currency can be spent on clothes for the main character. Fashionistas will appreciate the wide selection of outerwear, hats and all kinds of accessories in the play store. This option is designed to keep users wanting to return to the game. Pokeno Tournament, being, perhaps, the simplest fighting game, remains one of the most exciting representatives in its genre. Pokemon Duel is a tabletop turn-based online strategy game tailored for mobile systems. Players, as in almost all games in the franchise, are engaged in collecting outlandish creatures with unique abilities in order to then train them and arrange battles with their rivals. Each team has 6 wards, each of whom has skills useful in battle. This opens up a lot of scope for tactical and strategic planning, despite the casual nature of the project. Gradually, more and more deadly creatures appear in the player’s arsenal, and old friends evolve, learning new abilities.