Diablo 2: Resurrected, a remake of the cult ARPG that has significantly influenced gaming culture and video games in general, will go on sale on September 24th. Over the past 20 years, the game has not lost its relevance, which is why fans really demanded to recreate it.

Role-playing action game where in the role of one of the heroes (paladin, wizard, amazon, barbarian, necromancer, assassin, druid) you have to go through the circles of hell and on the way to destroy tens of thousands of demons in the name of world peace. You can play with friends or alone.

In parallel with this, the player will find more and more interesting items of equipment that will affect the character’s skills almost more than the traditional pumping.

Nominally, the game has an ultimate goal (to kill Diablo), but fans have clearly been doing something else for 20 years. In fact, they are simply collecting more and more powerful equipment to effectively destroy enemies. Why? Because fighting is just fun. Even after 20 years.

What is Diablo 2: Resurrected?

This is a remake (although Activision Blizzard calls it a remaster) of Diablo 2 and the Lord of Destruction add-ons, where all graphics were completely redrawn. At the same time, the logic and structure of the game remained the same, so attentive fans will surely have time to find more than one old bug. And by pressing one button, you can turn on the old picture with the same aspect ratio of the 4: 3 screen

Owners of several platforms will be able to transfer their save to any system without any problems – however, they will not be allowed to play with users of other devices, at least at the start of sales. 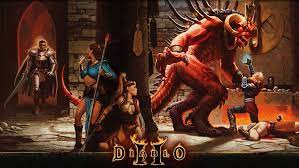 How to download Diablo 2: Resurrected? Where can I buy?

Apparently, the remake in Russia will be released only in digital stores – in retail, the release will either be delayed or will not take place at all. Representatives of Activision Blizzard were unable to comment on the situation.

Pre-orders are already open in digital stores. On PC, the game is sold exclusively on Battle.net – no Steam, Epic Games Store, GOG or other sites.

Diablo II: Resurrected is not just a remaster of the old Diablo II with new textures, but a complete remake. The game was ported to a new engine and added support for physics-based rendering technology, dynamic lighting, as well as new animations and spell effects. Plus, it now works great on widescreen monitors in 4K Ultra HD resolution.

Of the interesting innovations in the remake, it is worth noting the progress synchronization function, which will allow you to continue the game for your old characters from the original game (with all items saved) on any of the supported devices.

The recommended system requirements are as follows:

The launch was not very successful

As reported by IGN, from the very start, users started complaining about server problems that prevented players from playing, seeing existing characters, or creating new ones.

” In this case, the game advises to check the Internet connection, although it is obviously there.

Blizzard has already acknowledged server issues that prevent users from playing Diablo 2: Resurrected and said it is actively working on bug fixes.

Good afternoon, I purchased the PS 4 version, the downloads are very lagging, you go into the portal and you see the download and the character or the mercenary has already been killed, the picture lags far behind. The same thing happened in the 3rd city, in the 4th and 1st cities there was no such problem. 5th city the first 2 quests on the highlands, the game lags very much … I’m sure it’s not about the console, but about the game, the rest of the games with high demands work stably.

Good afternoon, I bought d2 immediately at the exit for Ps4, faced with long downloads in the second city, you throw the teleport, the download is in progress, everything is loaded, but the picture does not change, the player is already ready for battle and is already receiving hits, and the screen is still the same download. The same thing happened in the 3rd city, in the 4th and 1st cities there was no such problem. 5th city the first 2 quests on the highlands, the game lags very much … I’m sure it’s not about the console, but about the game, the rest of the games with high demands work stably.