The perfect game for two.

At the end of March, It Takes Two, a new game by the famous Yousef Fares, was released. The game designer did not change his traditions and again issued a title in which cooperative gameplay and the ability to entertain yourself with mini-games are in the first place. Alone, this game, in principle, cannot be completed, because in 95% of cases both main characters will be separated by a split-screen and will have to act in a coordinated manner.

On this occasion, for several days, I arranged races with my good friend under foamy drinks, and now I hasten to share with you my impressions of the process. If you want to be short, I’m ready to call It Takes Two a contender for the title of the best game of 2021. If you want a long time, enjoy reading.

The cost of It Takes Two is 2499 rubles on Steam or Origin. In the Microsoft Store, the game is sold for $ 39.99, and in the PS Store for 2899 rubles. Electronic Arts decided not to protect It Takes Two from hacking, which led to the game appearing on torrents within minutes of release.

The plot of It Takes Two is dedicated to Cody and May – a couple raising a young daughter, Rose. It just so happened that the family hearth cracked and the man and woman decided to divorce. You don’t need to be a family counselor to realize how negatively this affects Rose. The girl worries about the breakup and quarrels of her parents, often cries at night and is nervous in anticipation of the day when only one parent will remain at home. In a fit of stress, she even created small dolls, naming them after her parents.

Watching the conflicts between Cody and May, Rose mechanically played with these dolls and imagined that at some point they would stop swearing. Once she found a book by a famous family psychologist, which is designed to help young couples with problems. By a happy coincidence, she turned out to be magical. Cody and May became puppets, and the book itself became their mentor. Now the couple (and you with her) have to go through a difficult path of therapy, learn to trust and support each other, and also believe in love again.

The plot of the plot turned out to be very simple, but the power of the scriptwriters turns on after a few starting chapters. At first, Cody and May are physically unpleasant to watch. They constantly swear and argue, spitefully tease each other and try not to make peace, but to come up with a way to remove the spell and get a final divorce. In some moments, the ideas and actions of the couple are real disgust, and game designers skillfully emphasize these moments with the help of gameplay.

But closer to the middle, the ice between them begins to melt. Lovely compliments appear, fair statements to each other gain strength and feedback, and new tests of the book are taken for granted, not as necessary.

Now let’s move on to the most important thing – to the gameplay. As I said above, it will not be physically possible to go through It Takes Two alone. It’s not even the split-screen, but the very approach to the gameplay. At each game stage, Mei and Cody will have a different set of tools with which one hero must help the other.

And here I want to literally bow down to the game designers at Headlight Studios. I have never and in no other game in my life met so many game mechanics and such a variety of gameplay. In some interview, Fares even expressed a desire to get into a piece of bucks with someone, which in this game will not be boring for a minute. At one level, May will find a hammer from a hammer, and Cody will have a few nails at his disposal. This makes both characters fit for a particular task. Mei can break glass bottles with a hammer, and Cody is able to throw nails and fix objects. He can also create a path for Mei to fasten a few nails over the chasm for Mei to use to cross it. And all these chips will have to be combined in different ways to solve the riddles.

Then everything starts to develop even more rapidly. There are ropes and sliding on rails, arcade shootouts, when one player must pour a caustic mixture on an opponent, and the other must undermine it. Then there will be levels with planes, magnets, underwater swims, trips to different animals. There is even an episode in which the game becomes diabolic – with a camera on top, ultimate’s and hit combinations. 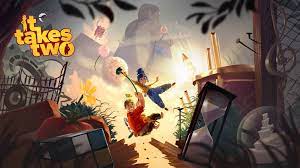 In the garden, the characters will fight wasps and help the squirrels in the guerrilla war. In Rose’s children’s room, they will have to fly on spinners and then fight an alien monkey that monitors the girl’s condition. There is even a level in the kaleidoscope – the very thing that we put up to our eyes and rotated to observe beautiful pictures.

The importance of teamwork

The authors skillfully play not only with different mechanics, but also with measurements. As a standard, players follow the characters from the third person with elementary controls – jump, double jump, dash and sprint. At certain moments, the camera can go up or gain a foothold on the screen, turning the gameplay upside down. On another level, you will have to fly one plane. One player will become a pilot, and the other will be armed with a cannon. The catch is that opponents attack from behind, and obstacles have to be destroyed from the front – a cacophony of screams is guaranteed.